Editorial: 'I doubt that big-money institutionalised charities can any longer be agents for radical social change. I doubt that genuine charity can even survive among the rich and powerful around these organisations.'

In 2013 Sir Roger Singleton, chair of the  Panel on the Independence of the Voluntary Sector said voluntary organisations enjoyed widespread support because they are independent and distinctive, and because of their independent voice of behalf of unpopular causes. He said:

"Our investigations show that in the past 12 months, the government has directly threatened that independence, requiring some charities which carry out work for government departments to toe the government line"

“One chief executive of a major charity in the social care sector told the Guardian they felt ‘muzzled’ by legislation…’ This has prevented them speaking out about Conservative social care plans that ‘will literally cost lives’. The Tories stand accused of gagging charities.”

My comment at the time was These UK charity chiefs will roar like lions – when the government says they can! Here is an extract:

“So the plight of the most vulnerable people will not be aired during election debates unless they can do it themselves. Charity chief execs have willingly taken the gag until the arguments are all done…”

So, where are we now? Have you heard any lions roaring?

Charities can be a safety net that catches vulnerable people failed by public services. But it is a hopelessly inadequate safety net because over a million elderly people are stuck lonely at home with unmet care needs, disabled people have been left to die in the unlit nether regions of austerity and the number of vulnerable children and adults being turfed out onto the street increases as I write.

The big charities are a failed enterprise in my view. They have been gently absorbed into the Establishment and can no longer be muscular agents for change. Each of them must keep the money rolling in to maintain expensive office buildings and pay large (sometimes excessively large) salaries to chief execs and their layers of senior underlings. I can more easily imagine charity managers rubbing shoulders with Ministers at posh dos than rubbing along with desperate people in night shelters.

Charity is a wonderful thing. It is still in rich supply in small local initiatives, charities and projects. I doubt that big-money institutionalised charities can any longer be an agent for radical social change. I doubt that genuine charity can even survive among the rich and powerful around these organisations. 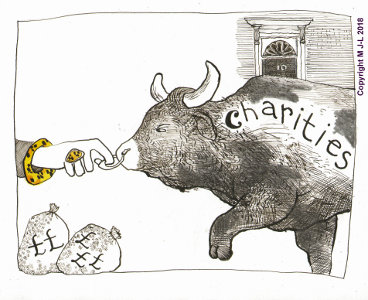 For an account of how vulnerable people can be helped,