This first part of the 21st century might be looked back on as a time of nations desperately trying to keep unwanted people out and, at the same time, working to get rid of people they feel do not belong

Millions of people are seeking new countries to live in because staying where they are has become impossible – perhaps because of war, lack of water, lack of food or lack of fertile land to grow food on. Other reasons include hatred, bullying and persecution because of ethnicity or religion. A natural response from any parent is to move so the family can survive.

While people in richer countries can see this immigration as a threat to their own wellbeing, it is valid to consider how far richer countries have caused the problems so many people need to escape from. UK wealth has its foundation in its past mastery over India, parts of Africa and many other countries of the British Empire. US and Europe have exploited the Middle East and caused the fires that are still raging – as the exploitation continues.

In this 18th year of the millennium, many countries are calculating which sections of their population they can deport in ‘cleansing’ operations. This includes Burma/Myanmar, India, US and UK. Burma/Myanmar is deporting the Rohingya people. India is deporting Muslims – even those who are Indian citizens. US are deporting more and more long-term residents. UK is probably set to deport many thousands of Roma after Brexit. There will be children in all of these populations. Many will become more vulnerable than they were. Those with disabilities will be pulled away fom whatever support systems they had.

These deportations do not necessarily follow legal processes. They can be vicious and murderous. When a US President can deport parents while keeping their children in cages, when a UK government can try to deport the people who were welcomed after the Second World War to help rebuild the country, then political cruelty and cynicism are being allowed to triumph over human rights and decency. 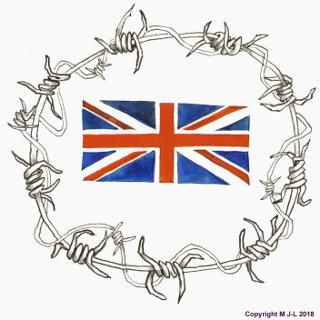 It seems more people are waving their national flags more vigorously. Barbed wire is being rolled out by the hundreds and thousands of miles. ‘Enlightened’ Europe (still including UK) and powerful America are setting the worst of examples. I resist the temptation to make comparisons with Germany in the 1930’s, but bullying, hatred and populism are taking hold. I fear the atrocities we have seen so far might be just the beginning.