In the UK…we do not like vulnerable people to be abused or killed by people who are supposed to care for them, BUT WE DO NOT LIKE WHISTLE-BLOWERS EITHER

UK newspapers and media are full this week of reports of hundreds of elderly people being killed in hospital by being given lethal doses of sedatives. Their conditions were not terminal, but particular medics decided to kill them anyway.

In 2012, a UK Department of Health report described the criminal behaviour of staff at Winterbourne View Hospital in which people with intellectual disability were mistreated and abused. Managers knew what was happening and allowed it to continue.

In a Staffordshire hospital between 2005 and 2008 (three years!) elderly people were deprived of food and water. Many died. This was while under the care of doctors and nurses.

A repeated pattern in these scandals, and in hundreds of similar ones, is that some concerned people knew what was happening and tried to blow the whistle. This includes brave staff members and relatives. The institutional response in each case was to protect itself by ignoring the complaints.

There is a personal decision to be made by people who work in institutions. You see something wrong in your hospital or school (or charity, church or army unit) and you have to decide to speak up or keep quiet. Very few people have not been in this situation at some time in their careers.

In the UK, and perhaps it is the same in your country, we do not like vulnerable people to be abused or killed by people who are supposed to care for them, BUT WE DO NOT LIKE WHISTLE-BLOWERS EITHER.

Whatever your concern is, when you blow the whistle the institution will do all it can to protect itself. Then you will become vulnerable yourself and expendable. Whistle-blowers commonly find their concerns about mistreatment, abuse or murder are not investigated, while they themselves come under investigation for their behaviour.

Whether it is a big issue that needs a big loud whistle, or a smaller issue that justifies an internal complaint to managers in your school, hospital or care home the consequences can be:

It is worrying that many senior managers in public services, charities / NGOs and private companies have climbed to the top by being careful never to rock the boat – never to get a black mark in their file as a trouble maker. For many, this must have meant keeping quiet when they should have spoken or, before that, choosing to be blind and deaf when vulnerable people in their organisation were being abused or killed. It might be these same senior people who hold your future in their hands when you try to raise concerns.

[Part of an approach to protect vulnerable people is Caring Activism in which small teams of citizens support vulnerable people in their community and watch over them if they are admitted into an institution. They can look out for abusive practices and then alert the public. This is an antidote to insitutional abuse that goes unchecked behind closed doors.] 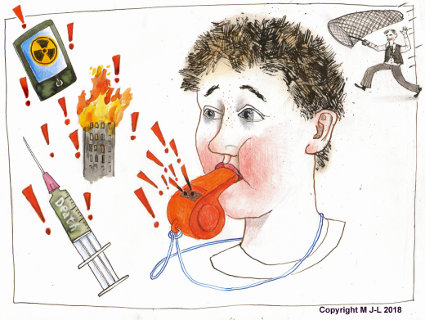